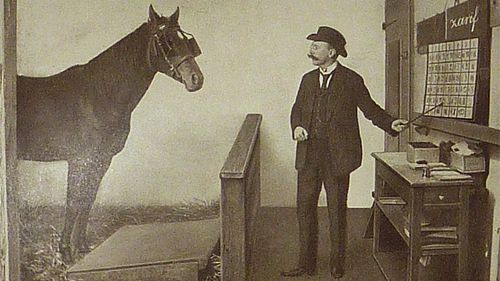 In doing research for a series of leadership training programmes, I came across a story dating back to 1911 about a horse named Clever Hans. Hans could apparently add, subtract, multiply and divide and solve all sorts of mathematical problems. When asked a question, Hans would tap out the appropriate number with his hoof.

While this appeared to be amazing at the time, it was actually nothing new. A number of animals had been trained to perform such tricks before but they all had to be cued by their trainers. Hans however, was different. He could run through his repertoire even when his owner was not present. In fact, he would answer questions for anyone!

They observed that it was the body language of the questioner that gave Hans his cue as to when to stop tapping. This could include a forward inclination of the head or even a dilatation of the nostrils. In other words, people were giving the horse the correct answer by communicating their expectations to him via physical signals. Clever Hans was only clever when people expected him to be!

What struck me was the similarity between the story and the way that people are managed in business. If you expect good things you give off positive signals and you usually get good results! Unfortunately, the reverse is also true. If you assume the worst, you give off negative signals which people pick up on and react accordingly. The chances are that if this occurs, your assumptions will actually prove to be correct. This is known as the self-fulfilling prophecy.

If this is the basic thinking, the employer will also probably not be too keen on spending money on training or releasing supervisors from their jobs for training or coaching. After all, when the cat’s away, the mice will play!

The tragedy of all this is that given the way the business has been structured, the chances are that employees will feel bored and uncommitted and they probably will goof off when there is no supervision!

To make matters worse, another self-fulfilling prophesy will probably also come into play. That is the perception that it is very difficult to dismiss employees in terms of our labour laws. As a result, supervisors fail to follow the required procedures for correcting unsatisfactory performance and conduct. When an employee does really overstep the line and the supervisor tries to dismiss him, he is unable to do so – because the procedures have not been followed!

The symptoms of this type of thinking can unfortunately be found in most South African businesses and include:

It is a cycle and it all starts with the assumption that employees are lazy and unreliable and cannot be trusted to do responsible work! Given our past history and the race question, with a lot of managers being white and the majority of employees being black, another dimension is added to the problem.

If we are to compete globally and to normalize our society, we need to break this cycle. The initiative must come from management. It is ridiculous to think that people, who are able to run homes, educate and raise families and participate in community affairs are unable to be trusted with meaningful work or to act in the best interests of their employer.

As a leader, to earn trust, you have to trust others first. Coaching managers to make different assumptions about people is a good start.

Instead of assuming that employees are stupid, lazy and reliable, managers need to rather take the view that most people want to:-

Once employers start to think this way a whole range of options, including the introduction of self-directed work teams opens up.