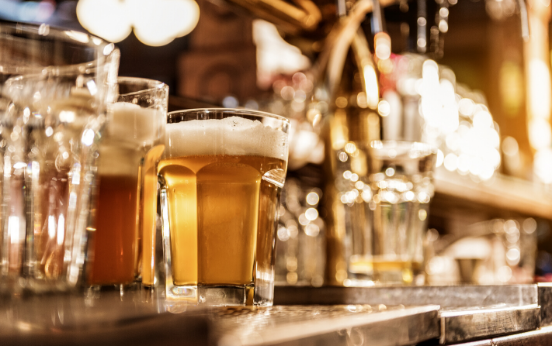 Before the lockdown, President Ramaphosa explained that the majority of cases being treated by hospitals were alcohol-related.

Before the lockdown, President Ramaphosa explained that the majority of cases being treated by hospitals were alcohol-related. Therefore, to take pressure off hospitals there would be a ban on alcohol for the duration of the COVID-19 lockdown.

There was no advance warning and many people did not have an opportunity to buy in stocks. As a result, a black market quickly developed and sales of pineapples went through the roof.

With the lockdown being lifted to Level 3 we saw all manner of celebrations and queues of people lining up to purchase liquor. All of this goes to show how deeply entrenched the culture of drinking is in South Africa.

In an article by NG Vellios and CP Van Niekerk of the University of Cape Town ‘Self-reported alcohol use and binge drinking in South Africa’, the authors reported that one in three South Africans consume alcohol. This means that the majority of the population don’t consume alcohol. The problem however, is that according to the article, 43% of drinkers admitted to binge drinking.

This is the real problem faced by employers – not the full alcoholic who drinks everyday but rather employees who go on a ‘bender’ every now and then. They might be fine for months on end and then absent themselves on a Monday or report to work under the influence.

Section 10 (3) of the LRA Code of Good Practice: Dismissalsholds that in certain cases of alcoholism and drug abuse employers should consider counselling and rehabilitation.

On the other hand the Occupational Health & Safety Actmakes it an offence for an employer to allow any person who is under the influence of intoxicating liquor or drugs to enter or remain at a workplace.

For this reason more enlightened employers have introduced substance abuse policies. Many take a zero tolerance approachand test everyone who enters the premises. Most hold that if an employee actually enters a working area where there is moving machinery, that employee will face a disciplinary enquiry. If found guilty, the employee will be dismissed, even for a first-time offence. The same would apply to a driver who gets behind the wheel of a vehicle while intoxicated.

If the employee is tested at the entrance of the premises or before going near moving machinery that employee is normally given a warning or final warning and offered rehabilitation.

If you drive your car with an alcohol level above 0.05%, you will be arrested and could well spend a night in jail. You will, in all probability, also earn yourself hefty fine and a criminal record if your blood is tested and you are found to be over the limit.

Intoxication At The Workplace

But …… being intoxicated at work has a different set of rules. The employer has to prove that the employee was in an unfit condition to work. While an alco-test provides an indication that the employee has had alcohol, on its own, it does not constitute proof of intoxication.

For example in South African Transport and Allied Workers’ Union obo Mmotong / Staffing Logistics– 2018) 27 NBCRFLI 8.37.2 also reported at [2018] 1 BALR 26 (NBCRFLI)an employee was dismissed after a breathalyser test indicated that he had consumed alcohol.

The employee admitted guilt at a disciplinary enquiry stating that he had consumed alcohol the previous day. He claimed that he was unaware of the employer’s zero tolerance policy on alcohol.

The Commissioner noted that the employer had charged the employee for reporting for work under the influence of alcohol. While the employer’s zero tolerance policy was not in contention, the employer still had to prove intoxication.

The breathalyser test had registered 0.05%. It is generally accepted that breathalyser tests are less accurate than blood tests, and that their results are not definitive. Corroborative evidence is required to establish intoxication.

The respondent had not led evidence to prove that the employee was intoxicated to the extent that he was incapable of performing his duties. The employee was reinstated with retrospective effect.

So what proof should the employer have provided?

First of all, it is good practice to complete a Checklist for Assessing Intoxication. This should be completed by the Security department if they are responsible for testing and be witnessed by the employee’s line manager or supervisor. There should be at least one but preferably two independent witnesses to the employee’s state of intoxication.

Observable signs of intoxication should be noted:

Lastly there must be CONSISTENCY. Unless you have given a clear directive and everybody has been informed of it, you cannot dismiss an employee for a first time offence if other employees were warned previously.

If the dismissal is disputed, then remember an arbitration is a complete rehearing so all the documents and witnesses that were used to prove intoxication in the disciplinary enquiry will have to be produced for the arbitration.